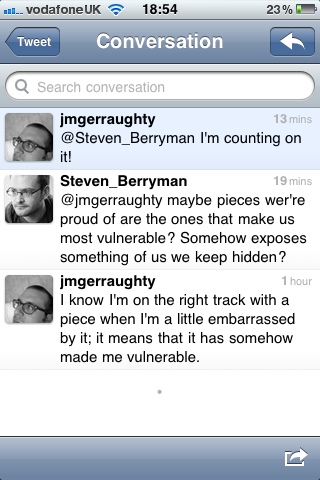 I am really pleased to have received Pedro de Alcantara’s book last week and keen to start reading to write my review. I feel a little nervous about trying to encapsulate what I hope to be a very interesting read in 500 words but fingers-crossed. I’ve managed to read the introductory pages and already nuggets of Pedro’s fusion of Alexander Technique and musical study are intriguing and the series of “Integrated Musician” books will no doubt be widely read.

Minutes ago I just replied to a tweet by a composer, Jason Gerraughty, about his new piece (see picture above). His vulnerability about his new piece instantly made me think about how a composition can somehow capture something of a composer’s personality – though those in support of autonomy in music would find the idea unlikely – and I immediately went to the idea something “hidden” in the composer is being exposed. Hence the vulnerability. There might not be an immediate connection between my opening comments on de Alcantara’s new book and Gerraughty’s comments on his new piece. For me, there is. The idea that there is an integration between the composer and his work – Pedro might be referring to musicians needing awareness of how their entire bodies function as a whole to produce our music. This is the same for composers.

I wonder how much we expose of ourselves as composers in our writing. But then do the performers – the delivers of the work – dictate the message that is received? Can composes guarantee the hidden vulnerabilities that are exposed or are they always to be coloured by the vehicle of performance? For me, it is the congruence – or lack of – between composer and performer that creates the intrigue.

I wonder if composers conscientiously – – or consciously – encode vulnerabilities, or self-created vulnerabilities into pieces. Is it beyond our control? Are we ever to escape the inevitability that within our art something of us is coded within it? Can we ever truly deny our body within our work?

I am yet to be convinced of the existence of true autonomy. I would hate to think it exists. I would hate to be anonymous in the works that take so much of my energy to create. At the same time something needs to be hidden; it is the intrigue of what is to be uncovered that makes some works worth a second listen.