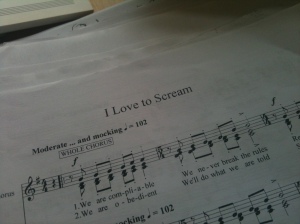 The show is very close now. Two more weeks of rehearsals – lots of run-throughs at the piano and polishing up with lots of detail – then a week of band call, technical rehearsal, dress then two shows. Amazing that one week will be the culmination of a project devised way back in May and that has involved so much time. Glancing at the list of musical items there are twenty-three which includes all the underscore music too. It has been a very different experience working on this musical; first, having a collaborator for the text and the collaboration being more than one-way traffic but a process that has involved considerable negotiation and discussion for how the text and music will interact. Working on the musical inspires me to consider opera writing as I enjoy the collaborative working and now  crave greater musical continuity for a complete work. Juniper Dreams connects well with the various songs and underscore – hopefully – and I have connected material throughout the show to ensure a sense of broader musical design.

Secondly. rehearsing my own music – sounds strange but I have never had to teach material to pupils before that I had written. This was an interesting process and led to subsequent changes to a key of a song on occasion to accommodate vocal ranges and it often felt like I was composing while I was rehearsing. The songs have been through a lengthy editing process because of the rehearsals and this is something I had not experience before; scores were often completed at speed in only a few sittings and rarely were editing after completion. Perhaps the musical rhetoric of Juniper Dreams is different to my previous work, I have a learnt a great deal from the process of song writing and scoring that will filter into my next compositional projects. Additionally the musical gave me an opportunity to reflect on the process of writing for young people but also in a way that gave immediacy to the intentions and moods the text captures. The vagueness of my usual compositional voice needed to be streamlined to ensure clarity for the listener and to aid the process of learning for the pupils the melodic and harmonic materials needed to be free of ambiguity. Vocal ranges needed to be sensible and achievable, particularly for the chorus. I found it all rather liberating to initially feel there were considerable limits when there ended up being so much possibility. I would love to write for W11 opera as I can see so much potential in musical theatre/opera for young people.

Scoring the show has been a labour of real enjoyment; selecting the initial colours was determined by my musician colleagues that would play for the performances but has allowed me to write some chamber music and for a moderate sized ensemble. I thrive on instrumental interplay in my writing and the vocal and piano score was suitably vacant in detail and as such the process of orchestration feels like composing rather than simply creating parts. I have limited experience of musical theatre orchestrations – other than my own work as an MD in school productions, more recently that of 42nd Street – and as such my approach to orchestral textures and colours is perhaps less than conventional and more ‘Berryman’ than maybe expected. I am hoping that I can capture the mood and emotional intent of each song with colourful writing that is not only enjoyable to play for the musicians but engaging for the listener.

The process is not yet complete – scoring to complete then to assemble into the complete score, extract parts (and the time-consuming checking) before the final week of rehearsals. I’m very excited to see the finished project.