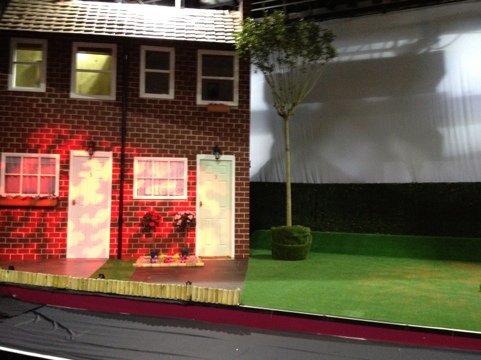 The set has finally been dismantled for Juniper Dreams. It made me realise how much had passed to get the project from the initial conception – my colleague Deborah suggesting we write one – to the performances last week was a rewarding learning curve. It represents the longest musical work I have written and I’m particularly proud that not only did the performers cope with something new – with some challenging vocal lines – but also performed it with such passion and professionalism. From teaching the songs to the cast I developed a keener insight into the musical possibilities of working with experienced and less experienced singers, and working with a writer/director have me a greater sense of producing music that met a well-defined brief.

Writing songs from her words was enjoyable – I was forever conscious that I would be teaching them so ensured sufficient repetition to minimise learning and make it something attractive for the performers to sing. I also aimed to capture the intent of the character and sometimes these vocal lines were less congruent with what a singer thought they could do. Once they were with me on what I saw as the character’s motives in a particular song, they worked with rigour at singing the challenging lines with care. Nevertheless one key change was necessary to ensure all the performers in a particular song were able to realise my intentions with confidence.

Scoring the musical was probably the most fun I’ve had; I had free choice of instrumentation but was keen to use my wonderful departmental colleagues so opted for flute (piccolo), oboe, clarinet (bass clarinet), horn, trumpet, two violins, ‘cello, piano and percussion. I worried this ensemble might not capture all the sounds necessary but I was thrilled with the result when I conducted the band call. Some songs were very fast to score yet others needed a slower approach, to paint the necessary colours to capture the mood of a particular phrase and section. With the ensemble I was now able to capture a more vibrant character for each song – and use word painting (particularly in Notice Me). I had so much kind feedback on the scoring and I am indeed very grateful for that.

Using musical material to draw connections throughout the music was important to me and I am pleased these helped make the musical slick structurally. I offered underscore and music to accompany dancing and I was thrilled this was allowed even if initially balancing the music and dialogue was tricky. The underscore allowed me to present similar material with subtle transformation and I hope helped to connect material across the whole show. Through such subtle transformation I hope the audience were able to feel drawn in to the action and plot development – though the performers did this well through the carefully directed acting.

I look forward to seeing the recording – five cameras caught the dress rehearsal. The experience of course will be very different from my perspective in the orchestra pit and with my attention focused on providing the huge number of cues to keep the show flowing. It has affirmed for me that I thrived on working collaboratively. I would love to work in such a way again and perhaps my next project of this kind would be an opera. Ambitious? Maybe.