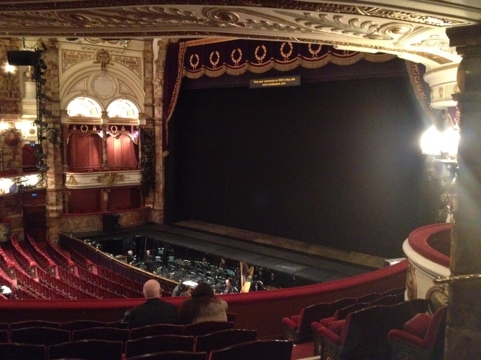 Tosca at ENO last night was compelling and very moving. Puccini always strikes me as a brilliant orchestrator and I was particularly taken by the cello ensemble writing accompanying Mario in the final act, the off-stage playing and the use of a chamber organ. Puccini’s operas seem to be so complete in their design and his virtuosity in structuring the drama with apt pace and emotional intent is inspiring. I was genuinely moved by the close of this work – the faked execution being unbeknown to Tosca to be real and her dramatic suicide – and left wondering how does Puccini do this?

The set was dramatic yet utterly perfect for the music; the lighting in the last act was particularly beautiful. It is the synthesis of these dramatic elements – lighting, set, actors, chorus, music and singing – that make opera compelling for me. Perhaps because I’m a composer, I see the composer of an opera as the prime driver of the work – it is the music for me that not only dictates the structure and pace but the character of the work. Productions can attempt to accentuate aspects of the music but equally they can be set against or beyond the score. Last night felt complete and appropriate.

During the intervals I was starting to read passages in Ian Bostridge’s ‘A Singer’s Notebook’ – he visited my school today and I wanted to catch up with his recent book (Faber and Faber, 2011) before I had the chance to meet him. What makes Bostridge an interesting musician is his background as a historian and his doctorate led to a book on witchcraft. One of the early items in ‘A Singer’s Notebook’ is a lecture he delivered in Edinburgh; here Bostridge has reflected on the interface between the rationalisation of magic in the west and the formation of classical music. I rather liked the link between equal temperament and this decline in magic. He gave interesting insights into his writing during the discussion – the book is a collection of his writings over some years with new comments – and responded to intelligent questions from the pupils.

Musicology featured several times in the discussions and as someone who studied musicology I feel I can see the relevance and importance of such research. Indeed this research has changed more than perhaps some in the discussions were aware of and as such the generalisations on the use of analysis were ignorant to more recent approaches. Nevertheless a fascinating afternoon.

Opera was mentioned several times – Bostridge saying his desire to perform Billy Budd – and he made a valid point regarding the changing operatic landscape with larger venues and larger spaces to sing in. As such the demands on future singers to produce a huge sound were ever increasing, as well as pitch creeping up and up (A = 444 in some parts of the world). Singing really does indeed push the body to something rather magical – and to have the chance to reflect on the challenges by placing the intricacies of the visceral experience of the performer with the intellectual concerns of preparing a performance was done with real aplomb by Bostridge. I look forward to hearing more of his work.