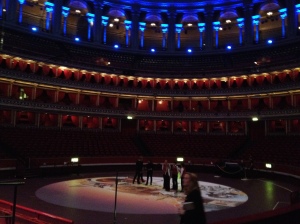 Being the first to respond to the London Sinfonietta’s Facebook post requesting a volunteer to be part of an encore by the composer Matthew Herbert meant I was one of twelve to be part of Herbert’s new piece, an encore for the London Sinfonietta Prom on Tuesday 14 August. Using our smartphones we recorded pre-determined length excerpts of the concert – between 10 and 20 seconds – one taken from each piece at a moment of our choice, and during the applause of the final piece we made our way to the stage to play our seven excerpts into pre-set microphones. My iPhone has made its Proms debut. Oddly I didn’t feel as awkward as I imagined I would holding my iPhone on the stage of the Albert Hall doing nothing but press play for each of my clips. The combined sound of our twelve set of recordings – all slightly out of sync – was not so clear but I was impressed to hear the broadcast on BBC iPlayer. Being able to reminisce on my favourite moments of the concert, combined with the other eleven ‘performers’ was quite interesting. Matthew Herbert aimed for the piece to be a commentary on the way many of us experience music today – on our smartphones/iPods – and the slightly-distorted playback of the smartphones gave a nostalgic edge to the sound. Is this ‘music’? It was more an experience I guess, some kind of ‘happening’ but an intriguing one nonetheless. Something I’d like to try with students perhaps, and an experiment that could be of use in my own composing.

You can listen again to the here for the next few days: BBC Proms: 2012 Season: Prom 44 – Ligeti, Berio, Xenakis, Harvey, Andriessen, Cage http://bbc.in/RSNboN – Matthew Herbert’s remix can be heard from 1 hr 28 mins, approx.