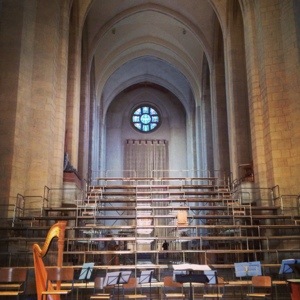 Vivace Chorus kindly invited me to introduce the programme at their ‘Best of British’ concert last Saturday; my first pre-concert talk. I’d received the scores a few weeks prior to the concert and was quickly reminded of my own experiences of singing similar repertoire as a child, and an adult. Reading that the concert was part of the choir’s ‘Contemporary Choral Classics’ series made my mind jump to the likes of Xenakis initially, then perhaps Gabriel Jackson and others. The programme included four works, one piece each from the composers Will Todd, Bob Chilcott, Paul Mealor and John Rutter. The musical language of these composers is not ‘contemporary’ (well, what I considered ‘contemporary’) but the works were all recent, being composed within the last ten years. My dilemma was, what can I say about works that do not require any explanation due to the immediacy of their musical language? All are written in an attractive musical sound world (extended tonality) and the cliches of unprepared dissonances, primarily the major 2nd added to conventional harmonies.

I read through the scores, listened to some recordings and pondered what could I offer in a talk. I read some reviews and realised this repertoire has a broad audience; it has received many performances, and is something intended not for professionals to sing (primarily) but for a wide variety of choral circumstances. It needed to avoid unnecessary complexity to ensure it could be rehearsed with ease, perhaps on occasion with singers who were not as fluent readers of notation as some and as such the vocal writing was straightforward. At no point did I think, ‘this is bad music’; It was written for particular circumstances, and as such it is all incredibly successful for such circumstances. What struck me about all of them is the extended tonality, and added-note harmony. I felt that such a harmonic vocabulary – so prevalent in American and British choral music of recent years – was something worth presenting.

My talk started with the first three notes of ‘Three Blind Mice’, harmonised with tonic-dominant-tonic. I explained all music (tonal music, according to Schenker, as I understand him in my rather superficial way) could ultimately be reduced to this progression; composers prolong the experience through journeys to different keys and the use of dissonance to create a sense of expectation and a desire for resolution. Prior to this I played some Morton Lauridsen and Eric Whitacre, placing this added-note harmony in some context. Whether or not introducing an audience to some idea of dissonant treatment was a good way to start I’m not sure, but it seemed to be useful. The rest of the talk I picked out interesting passages from the concert programme, highlighting the harmonies and how they help create the right mood for the text.

I enjoy talking about music, as every time I do I realise it really doesn’t make much sense…