Post thirty-six in our (re)learning to teach music series. This is the first week responding to the tasks in chapter six in Learning to Teach Music in the Secondary School. This is week eight of the collaborative blogging.

The lesson I’ve chosen to reflect upon is the first lesson in a unit based on The Carnival of the Animals. A unit such as this has great scope to engage in all of the different types of music knowledge, and depending on the pupils in your class, the dial of focus can easily be adjusted accordingly. Through considering how I engage pupils in such a lesson, I’ve charted my application of Elliot’s knowledge types below. 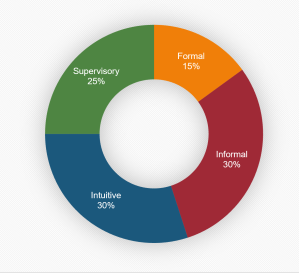 In an opening lesson such as this, I would:

On reflection, I don’t think I’d want to change the knowledge focus distribution for this lesson. This piece of music offers a unique avenue in which to explore a piece of music without placing the emphasis on the ‘formal’. It allows each pupil to bring their own knowledge to the table, all while gaining an instant and tangible understanding of how music can be used to communicate the thoughts of a composer. The option is always there to adjust the allocation of knowledge types at this early stage, however in doing so, the meaning of the music would be diluted. With all considered, I remain happy with the above knowledge type distribution.

I would say the type of knowledge might vary dependent upon the level being taught: at KS3 there is often ‘informal’ and ‘intuitive’ knowledge during the initial stages of practical work, soon there is a need for ‘formal’ knowledge especially from students with little previous explicit experience in music-making e.g. ‘how’ to play a particular chord; towards the end of KS3 and into KS4 work there is more ‘supervisory’ knowledge in evidence, mixing with the other three types; finally at KS5 there is more of a return to a need for ‘formal’ knowledge – not least in relation to preparation for examinations.  I think that students are very aware of their own level of musical understanding, perhaps not always able to articulate it, but quite aware.  Consequently I have found that they will frequently look to direct lessons towards particular knowledge types as appropriate for their own needs.  There are times where they need to “feel” the music and so ‘intuitive’ takes precedence, other times where the familiarity and security of a “correct” way of doing something means that they look for the ‘formal’.

I would say that in the vast majority of music lessons taught, formal knowledge and supervisory knowledge are the predominant form of musical knowledge if the lesson is viewed using Elliot’s musical knowledge classifications. There may be some informal knowledge and very rarely some intuitive knowledge, but the last one will really depend on what sort of exposure to the style of music the students may have had. The intuitive knowledge is the most difficult to acquire as immersion in a musical style takes a long time. This can be seen in many student Blues performances which only very occasionally really seem idiomatic. This is not the students fault, but is usually due to time constraints in teaching time and how long schemes of learning are delivered. To really get into the Blues can take years, as many jobbing Blues musicians will tell you. Lessons can be adapted to allow informal knowledge to be used via questioning and open ended tasks that all students to explore their own interests in the classroom. Each of the 4 knowledge types that Elliot describes are important and all make a large contribution to their musical understanding. However, as I have said above, the intuitive is the hardest to master and therefore the one that is most often left out and ignored.