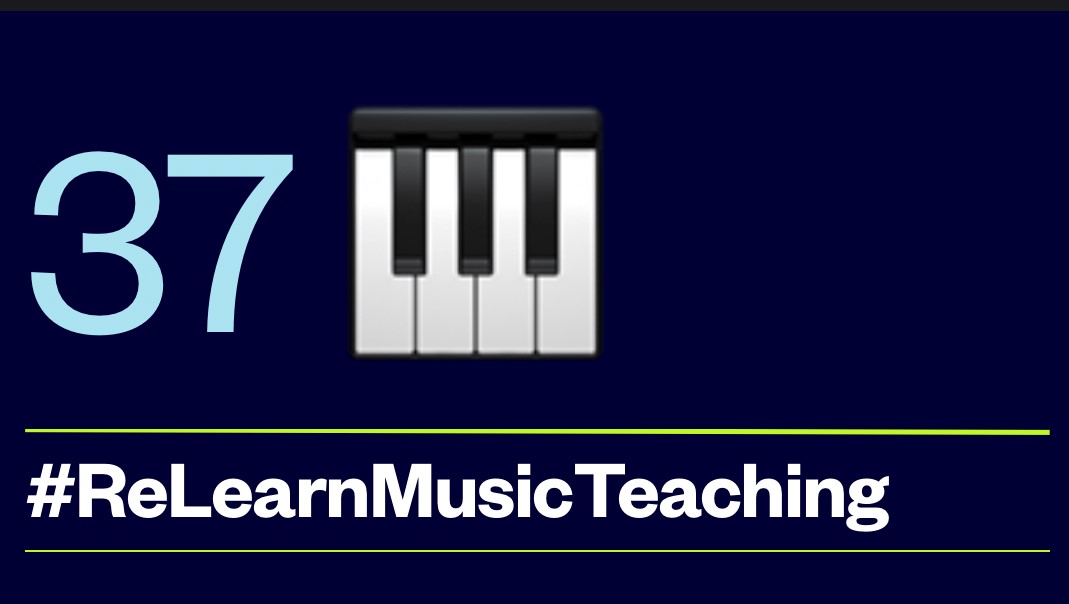 Post thirty-seven in our (re)learning to teach music series. This is the first week responding to the tasks in chapter six in Learning to Teach Music in the Secondary School. This is week eight of the collaborative blogging.

Formal Knowledge: The part where pupils are asked to play one note from the chord is working on this knowledge. Pupils need to know how to play their instrument so will need to have this knowledge to help them. The linking passing notes is also something which will develop this type of knowledge as they learn harmony.

Informal knowledge: The aspects of the lesson where pupils are asked to add their own ideas. This could be from the improvisation and composing their own musical ideas where they can bring their own influences.

Intuitive Knowledge: This is one of the aspects that is being developed extensively in this kind of task. The improvisation where pupils are thinking about what is musically right in a style. I feel this type of knowledge is difficult to teach with pupils and tends to come through practice and listening. This is evident when trying to get pupils play or record in time to a click track.

Supervisory Knowledge: This knowledge is being developed through use of discussions and evaluations of music. Looking back on what has worked intuitively and making sense of this to apply in another context

Here are my thoughts on the activities suggested to help achieve musical immersion in the context of Pachalbel’s Canon.

There is much musical learning to be gained from the activities connected with Pachelbel Canon, with opportunities which would fall under categories noted by Philpott and Elliot. By the end of the activity there will be knowledge gained ‘about’ the piece as it is put into context, in the course of doing the activities the ‘how’ of music is inevitable, and by participating knowledge ‘of’ from the “inside” if you like, is generated. Similarly Elliott’s ‘intuitive’ knowledge is shown during the parts of improvisation and when exploring the chord sequence themselves ‘supervisory’ elements will be to the fore. It would vary from class to class whether previous ‘formal’ knowledge [eg of chords and notation reading] is drawn upon or whether, for some students, this is rather their ‘informal’ knowledge. I much prefer teaching from a starting point such as this – building on a short, straightforward example but being aware of the chance to take things off in many directions – all the time building awareness and understanding across the group.

The pupils are learning a number of skills from doing exercise 6.2, the chord sequence from Pachebel’s Canon. They are learning some harmony and how to fit a melody/part to a chord progression in the part of the task where they are improvising vocally over the top of the chords. They are also learning about voice leading, part writing, holding their own part when singing as well as looking at improvisation and melodic writing to fit a chord sequence. This is developing all of Elliot’s knowledge types that we discussed yesterday. Again, getting the feel for the music may take quite a long time so I would maybe move the second task to a bit later as this may be difficult for pupils to achieve well, even after teacher modelling.